How many more bags are there? There's no end to these bags....SIX in total.... What a

mess... our B&B room looks like a bomb hit it. Stuff everywhere...OK, it's time to get

organised, pack these bags with our gear... and get some sleep!!!!! I was exhausted from all

the organising and we hadn't even got to the start line yet.... Bed at 9.30pm Long day

Ironman day started at 4am. After a very twisty and unsettled night's sleep it was time to

get some fuel into our bodies. Porridge, toast and coffee. It felt like the middle of the night...

in our white bag. The whole transition area immediately felt intimidating as every athlete

looked so professional and super fit. Thoughts of "what am I doing here "maybe it's all a bad

dream" rushed into my head. Put our food and drinks on our bike... checked our tyres and

joined the queue for the port loos. "Best not need the loo again as there were about 20

people in front of us".

swim hat, and start to make our way to the beach. The people of Tenby were lining the

streets as we walked down to the beach start. The atmosphere was already alive and this

was only 6.20am As it was a "rolling start" we had to choose which group to swim with

according to how fast we would complete it. At this stage it was goodbye to Mike as he was

in the "much" faster swim group. There was such a buzz as we waited for the Pro's to start

first. Before we knew it we were in too.

No time to wet goggles or get them settled... it was just go.... don't lose your goggles, don't

get kicked in the head or face, don't let other swimmers push and knock you around.... just

keep swimming. The swim course was in the shape of a triangle measuring 1.9km. We

needed to swim this once, leave the water and run along the beach for 200m (called an

arms and legs and red heads were everywhere. As we got nearer the first enormous red

buoy the swells got bigger. There were volunteers on paddle boards and in canoes all

around us. Turning at the first buoy was tough as the swells were big and it was difficult to

sight. I started to feel nauseous from the big swells and thought I would be sick but held on.

Mike enjoyed the swim having practised a lot in the sea so was ok with the big swells. He

Now 1km to run to transition. Pulled my old runners from my purple bag and off up the cliff

side which was zig zag all the way. Hurry into transition, grab my blue bag containing all my

cycling gear and changed as quickly as my cold hands allowed me to. Ran to my bike and off

peninsula. There were still some mighty hills with gradient signs that read 14%. Just when

we could have picked up some speed the wind pushed us back. So this cycle was going to be

hell I decided. This guy passed me on a fairly flat section and then I passed him on the hills.

he had in his small rucksack) at the first food station. Does this guy realise he is taking part

and some more hills just to finish us off..... We needed to cycle the super difficult, super hilly

loop twice and boy did those hills just keep coming....

nauseous. My Motilium were in my Run bag back in transition....not very clever... My

emptier and heavier.... but I still couldn't eat. I watched as my speed slowly slipped away

wasn't going to make the cut-off time. I knew my race was over. My Ironman experience

lasted just under 8 hours. I felt angry first, then sad and disappointed but changed those

thoughts pretty quickly and decided to be happy about what I had achieved.

In the meantime Mike was pushing it out on the hills. Clocking up a fair pace for the first

couple of hours when just as the hills started to kick in his legs started to cramp up. Front of

thighs and inner thighs decided to spasm not allowing him to bend his legs. So off he had to

get and sit at the side of the road hoping it would ease. Very painful but refused the help of

the Medic in case the Medic didn't allow him to continue. After 15mins his legs began to

loosen and off he went again. Sausages, gels and energy bars were keeping him going.

Progress was slow. Then at about 100km the same cramps in the same muscles. Pull in, get

off, rub them, stretch them, and maybe just call it a day. First time ever that quitting

entered his head... No start again slowly and see how it goes....

On the second time around the hilly loop at about 130km he got a puncture. Luckily it was

front tyre. Those quitting thoughts tried to push in again. But no messing around here, fixed

and on the move again in about 5 mins.

for Mike. I was getting concerned that he was so long on the bike course. When he

eventually came into sight I was so relieved to see him. He stopped and explained what had

been going on. He had made the cycle cut-off time but was doubtful about carrying on. "Just

do one loop" I said and see then. I didn't want him to be a DNF'er like me. Four loops of

10km around the town of Tenby. 5km up hill and 5km downhill four times. Mike walked

most of the up hills and ran the down hills.

Athletes were now beginning to look a little spent. Daylight was disappearing and darkness

was closing in. I hung out at the food station so I could encourage Mike and the other

athletes every time they came around. Salty pretzels, water, flat coke, energy gels and the

constant support from the spectators kept the athletes going. Mike finished his Ironman in

16hrs 15mins. What an achievement. Hugh congratulations to Mike... Iron Mike for sure....

This wasn't just about the day, it was about the hours, days, weeks and months of training

which led us to the day. Ironman Wales, they say is among the top three most difficult

Ironman races in the World. The support and encouragement from the Welsh people was

absolutely phenomenal. They carried their sofas outside, had picnics at the side of the road

and sat drinking wine so they could be there for the athletes. They created a narrow

many different ways. As Mike said "it was the hardest thing he has ever done". One thing's

for sure you absolutely have to step out of your comfort zone, that's where all the learning 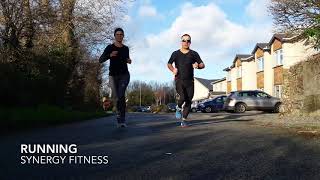